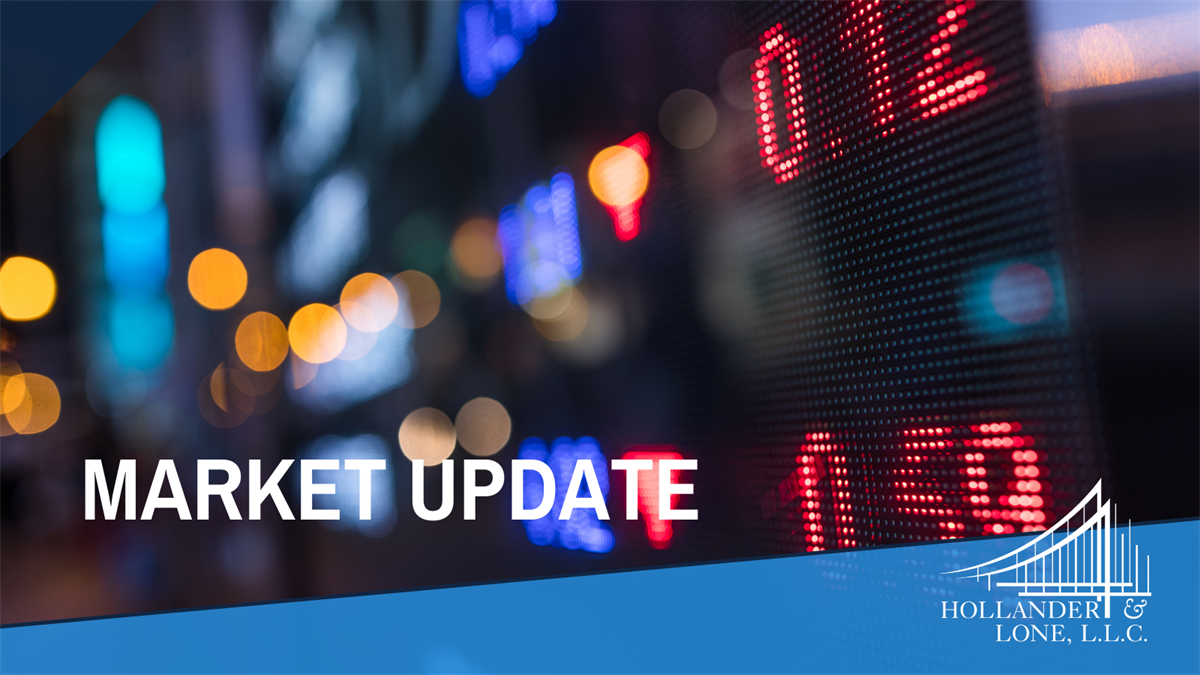 Not all recessions are created equal. Previous downturns in the U.S. were prompted by various shocks, with the most recent recession started by health and government-induced shutdowns. Other recessions started in the corporate sector, whereas some started from commodity shocks. The next one could start from geopolitical tensions. Nonetheless, we think the current business and consumer environments are safe from near-term recession risks.

NOT ALL RECESSIONS ARE CREATED EQUAL

Recessions are sometimes difficult to describe, let alone predict. Definitions vary widely. To make matters worse, some coin their mixed forecasts as a “growth recession.” 1 Some simply describe a recession as two consecutive quarters of negative economic growth, which is clearly not true because the 2001 recession was shorter: growth in the first quarter of 2001 declined by 1.3% annualized but between strong quarters both grew above 2%.

The National Bureau of Economic Research (NBER) is the official arbiter of recessions and their definition is not much better. “A recession is a significant decline in economic activity spread across the economy and that lasts more than a few months.” 2  The NBER specifically looks at economic indicators such as production and employment. Because the definitions can be elusive and ambiguous, we think it behooves investors to focus on the overall trajectory and economic environment for both businesses and households.

THIS TIME IS DIFFERENT, OR IS IT?

As we emphasize above, each recession has different causes and different impacts, but one thing that is not different is the required analysis. Whatever the circumstance, investors should look at multiple signals, not just the infamous and often misused inverted yield curve indicator. Our base case is the domestic economy will weather through this current storm of elevated prices, geopolitical risks, and clogged supply chains. Serious risks remain, but we think business and consumer metrics support our base case thesis that the U.S. will not fall into recession this year.

CONSUMERS ARE MUCH LESS LEVERED THIS TIME AROUND

After the Great Financial Crisis, consumers started deleveraging. Both the Debt Service Ratio and the broader Financial Obligations Ratio gradually declined and remained steady until the emergence of COVID-19. Government pandemic assistance programs including stimulus and forbearance periods added volatility to consumers’ financial obligations, but if consumers are able to keep relatively low debt levels, we think the consumer can successfully navigate a period of rising borrowing costs without squelching spending. 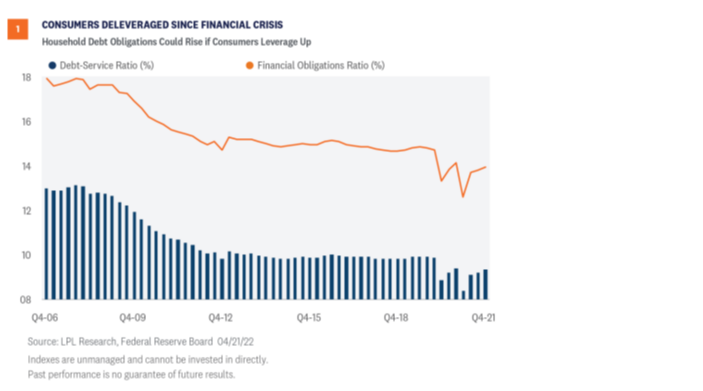 CHECKABLE DEPOSITS ARE AT HISTORIC LEVELS

High savings will help consumers navigate the current inflationary period. Given the uncertainty of the pandemic and generous stimulus measures, deposits grew to roughly $3 trillion above normal levels.3 During the crisis when the Federal Reserve (Fed) aggressively cut rates and individuals were highly risk averse, the cost of holding checkable deposits was low so individuals tended to increase savings, thereby adding to bank deposits. Aggregate savings were also bolstered by higher income households who normally spend a larger percentage of discretionary income on services – like travel experiences – but were shut down during high prices and economic uncertainty. 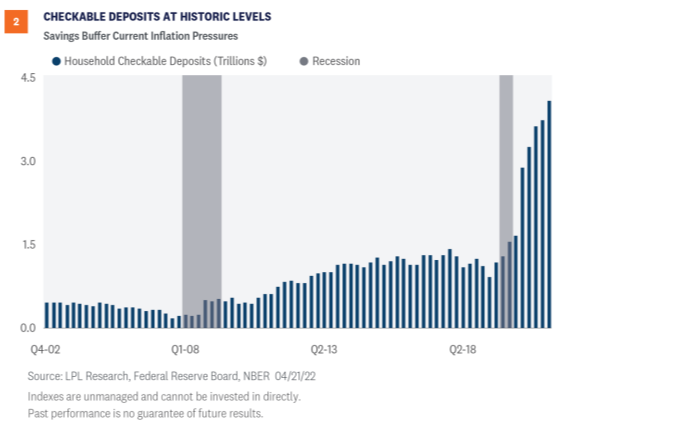 LABOR MARKET GIVES POWER TO THE PEOPLE
Employment rebounded from the lows of April 2020 but soon after the beginning of 2021, the rate of job creation slowed. The tight labor market is ripe for the 1.5 million former workers to return on their own terms. Such a high inflationary environment could convince some of these “lost” workers to return. As long as the economy is approaching full employment, the Fed will focus on the mandate for price stability. Our base case scenario includes a cooling of both inflation and the job market, which may allow the Fed to pause rate hikes toward the end of the year, limiting risks of over tightening. In many previous cycles, the Fed was accused of overtightening and pushing the economy into a hard landing, which is the scenario where unemployment rises and economic growth contracts. 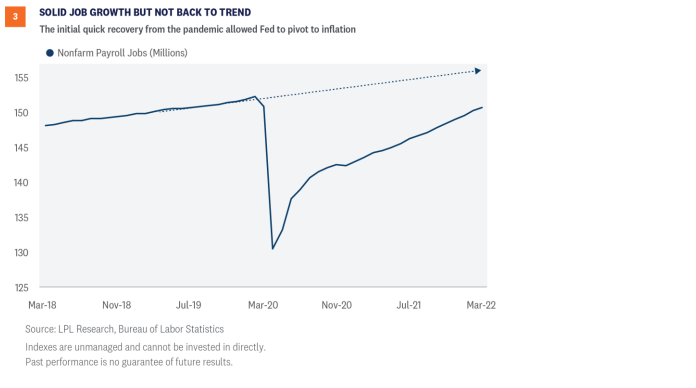 Consumers are likely in a safe space for the current environment, but what about businesses? The National Federation of Independent Business (NFIB) reports that small businesses are adjusting to a variety of current headwinds such as a tight labor market with high quit rates and clogged supply chains pushing up raw material costs. As of March, roughly 50% of small businesses in the U.S. raised compensation to attract and retain workers according to the NFIB. In the same month, over 70% of firms raised prices to cover increased costs. Firms with the ability to pass along cost increases will be able to protect profit margins as labor and material costs increase.

Managers in both services and manufacturing anticipate a slowdown in business, yet still expect growth in spite of the headwinds from commodity markets and tight labor markets. In fact, both indexes are above 55 – values above 50 indicate expansion. If firms are able to recalibrate running their business, we expect a rebound in growth the latter half of this year even though the first half might be sluggish.

Not all recessions are the same. Risks remain: the Fed could lose sight of its dual mandate or supply chains remain clogged from Eastern European wars and Asian lockdowns. Inflation could not cool as consumers pivot back from goods-centric spending (cars and washing machines) to services spending (hotels and airplane tickets). In spite of these risks, the metrics above suggest that the economy could escape a recession in the near term, with potential for nearly 3% growth this year.

On balance, we think the economy is steady enough to handle the current tightening cycle even if the Fed is coming late with its hawkish tones.

This material is for general information only and is not intended to provide specific advice or recommendations for any
individual. There is no assurance that the view s or strategies discussed are suitable for all investors or w ill yield positive
outcomes. Investing involves risks including possible loss of principal. Any economic forecasts set forth may not develop as
predicted and are subject to change.

References to markets, asset classes, and sectors are generally regarding the corresponding market index. Indexes are
unmanaged statistical composites and cannot be invested into directly. Index performance is not indicative of the performance
of any investment and does not reflect fees, expenses, or sales charges. All performance referenced is historical and is no
guarantee of future results.

Any company names noted herein are for educational purposes only and not an indication of trading intent or a solicitation of
their products or services. LPL Financial doesn’t provide research on individual equities.

All information is believed to be from reliable sources; how ever, LPL Financial makes no representation as to its completeness
or accuracy.

ISM Non-Manufacturing PMI (Services) is based on surveys of more than 400 non-manufacturing firms’ purchasing and supply
executives.